Hamamatsu Photonics MPPC is a new type of photon counting device made up of multiple APD (avalanche photodiode) pixels operated in Geiger mode and available in room temperature operation. The MPPC is essentially an opto-semiconductor device with excellent photon counting capability and which also possesses great advantages such as low voltage operation and insensitivity to magnetic fields.

Principle of operation
Photon counting
Light has the properties of both a particle and a wave. When the light level becomes extremely low, light behaves as discrete particles (photons) allowing us to count the number of photons.
Photon counting is a technique for measuring the number of individual photons.
The MPPC is suitable for photon counting since it offers an excellent time resolution and a multiplication function having a high gain and low noise. Compared to ordinary light measurement
techniques that measure the output current as analog signals, photon counting delivers a higher S/N and higher stability even in measurements at very low light levels.
Geiger mode and quenching resistor
When an APD is operated at a reverse voltage higher than the breakdown voltage, a saturated output inherent to the APD device occurs (Geiger discharge) by input of light regardless of whether the light level is high or low. The condition where an APD operates at this voltage level is called Geiger mode. Geiger mode allows obtaining a large output by way of discharge even when detecting a single photon. Once Geiger discharge begins, it continues for as long as the electric field in the APD is maintained.
To halt a Geiger discharge and detect the next photon, an external circuit outside the APD must lower the operating voltage. One specifi c example for halting the Geiger discharge is a technique using a so-called quenching resistor connected in series with the APD. This quickly stops avalanche multiplication in the APD because a drop in the operating voltage occurs when the output current caused by the Geiger discharge flows in the quenching resistor. The output current caused by Geiger discharge is a pulse waveform with a sharp rise time, while the output current when Geiger discharge is halted by the quenching resistor is a pulse waveform with a relatively slow fall time [Figure 5].
Structure
The MPPC structure is shown in the following fi gure. The basic element (pixel) of an MPPC is a combination of the Geiger mode APD and quenching resistor, and a large number of these pixels are electrically connected and arranged in two dimensions. 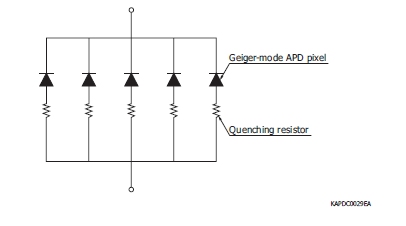 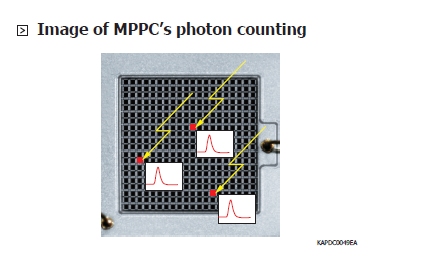 Basic operation
Each pixel in the MPPC outputs a pulse at the same amplitude when it detects a photon. Pulses generated by multiple pixels are output while superimposed onto each other. For example, if four photons are incident on different pixels and detected at the same time, then the MPPC outputs a signal whose amplitude equals the height of the four superimposed pulses.
Each pixel outputs only one pulse and this does not vary with the number of incident photons. So the number of output pulses is always one regardless of whether one photon or two or more photons enter a pixel at the same time. This means that MPPC output linearity gets worse as more photons are incident on the MPPC such as when two or more photons enter one pixel. This makes it essential to select an MPPC having enough pixels to match the number of incident photons. 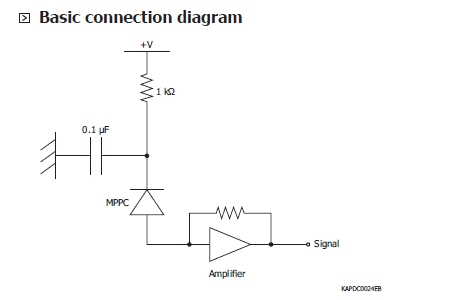 For the MPPC readout circuit, a current-to-voltage amplifi er can be used as with previous semiconductor devices. The MPPC outputs high-speed pulse signals, but because the gain of the
MPPC itself is high, there is no need to greatly increase the gain on the circuit side. This has an advantage that there is more freedom in circuit design.