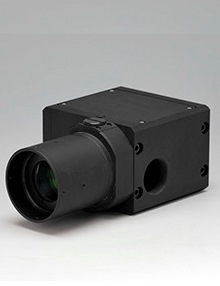 Compact scan head for easy assembly into a system

An optical block that combines galvano scanners with a telecentric fθ (F-theta) lens designed for laser beam scanning in the visible range. 21.5 mm diameter observation area. Full measurement systems such as a laser scanning fluorescence, reflecting, or confocal microscope can be made by coupling this block to other optical blocks. High magnification images can be observed with a photomultiplier tube by attaching the scan block to the C-mount port of a commercial microscope. 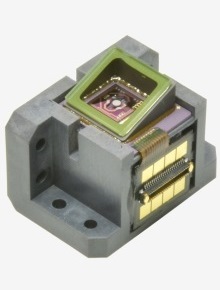 Miniature, high performance Electromagnetically driven two-dimensional laser scanning MEMS mirror
The S13989-01H is an electromagnetically driven mirror that incorporates our unique MEMS (micro-electro-mechanical systems) technology. The device was made smaller by arranging the magnet beneath the mirror. High reliability was achieved by employing a hermetic seal package. Electrical current ﬂowing in the coil surrounding the mirror produces a Lorentz force based on Fleming’s rule that drives the mirror. Hamamatsu MEMS mirrors offer a wide optical deﬂection angle and high mirror reﬂectivity. 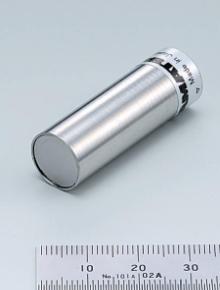 The J12432-01 capillary lens is an optical element for X-rays, consisting of a bundle of numerous hollow glass capillaries formed into a cylindrical shape with one end gently tapered. This lens enables X-ray collimating by using total reflection. 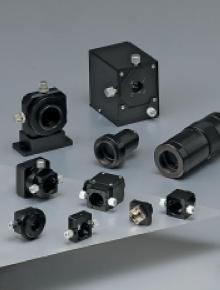 The optical blocks are compact units that contain components such as bandpass filters and dichroic mirrors. They are designed for lowlight-level measurements that use PMT modules and high-sensitivity cameras. Because their optical components are placed precisely through the use of high-precision machining, the blocks shield light superbly. Also, you can use the separate blocks in different combinations by removing and attaching them with thumbscrews. 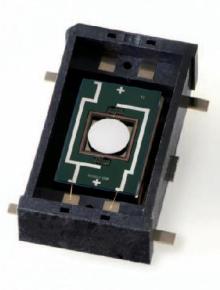 The S12237-03P is an electromagnetically driven mirror that incorporates our unique MEMS (micro-electro-mechanical systems) technology. We achieved an ultra-miniature scale by mounting the magnet beneath the mirror. Within a magnetic fi eld generated by the magnet, electrical current fl owing in the coil surrounding the mirror produces a Lorentz force based on Fleming’s rule that drives the mirror. Hamamatsu MEMS mirrors offer a wide optical defl ection angle and high mirror refl ectivity as well as low power consumption. 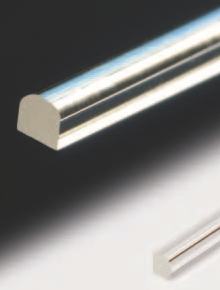 The X10468/X13267/X13138 series devices are a refl ective type of pure phase Spatial Light Modulators (SLMs), based on Liquid Crystal on Silicon (LCOS) technology in which liquid crystal (LC) is controlled by a direct and accurate voltage, and can modulate a wavefront of light beam. The LCOS-SLMs are carefully designed to achieve high light utilization effi ciency from various points of view, such as refl ectivity, aperture ratio and diffraction noise due to the pixel structure.
The X10468/X13267/X13138 series can be controlled via a PC using the Digital Video Interface (DVI), which is a standard interface for PC displays. The distortions in the LCOS chip, such as wavefront distortion and non-linear response of the LC, are effi ciently compensated by the controller.
Easy PC control, precise and linear phase modulation characteristics can be accomplished with the X10468/X13267/X13138 series.
They can also provide high diffraction effi ciency and high light utilization effi ciency. 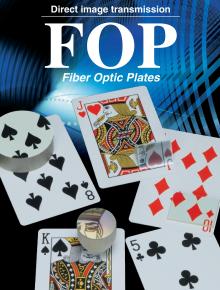 Hamamatsu Photonics FOP is an optical device comprised of a bundle of micron-sized optical fibers. The FOP is used as a lens to convey the light and image