Overview
Atomic absorption spectroscopy (or AAS) in its modern form came from principles developed by Australian physicist Dr. A. Walsh in 1955.
Atomic absorption spectroscopy is ideal for analyzing minute quantities of metallic elements because its operating principle and analysis method offer relatively simple measurement with high accuracy.
Hamamatsu Photonics provides a full line of hollow cathode lamps(空心陰極燈管) developed by our discharge tube manufacturing technology accumulated over long years of experience. These lamps provide the sharp, high-purity spectral lines essential for high accuracy measurement.
原子吸收光譜法（或AAS）的現代形式來自澳大利亞物理學家A.Walsh博士於1955年開發的原理。
原子吸收光譜法（或AAS）是理想的分析微量金屬元素的工作原理及分析方法，提供相對簡單的高精度量測。
累積了多年放電管生產製造技術與經驗,Hamamatsu Photonics提供全系列的空心陰極燈管(hollow cathode lamps )。這些空心陰極燈管(hollow cathode lamps )提供了原子吸收光譜法（或AAS）的高精度測量所需的尖銳，高純度的光譜。
Type of hollow cathode lamps
Hollow cathode lamps(空心陰極燈管) consist of single-element lamps and multi-element lamps. Single-element lamps are usually superior to multi-element lamps in absorption sensitivity and analytical line radiant intensity. Although multielement lamps offer the advantage of simultaneous determination of multiple elements, their cathode composition must be determined by taking the properties of the metals to combine fully into account, so fabricating cathodes from an optional combination of elements is not possible.
Applications
● Atomic absorption spectrophotometers (原子吸收光譜儀)
● Atomic fluorescence spectrophotometers
● Multi-element analyzers
● Environmental analytical instruments
Construction
As shown in Figure 1, a hollow cathode lamp is constructed with a bulb having a window (④ in Figure 1) made of quartz or UV-transmitting glass or borosilicate glass for spectral line emission, and into which a hollow cylindrical cathode (② in Figure 1) and a ring-shaped anode (① in Figure 1) are assembled. Noble gas is also sealed inside at a pressure of several hundred pascals. The cathode is made of a single element or alloy of the element to be analyzed to ensure sharp analytical spectral lines with an absolute minimum of interfering spectral components.
Operating Principle
The hollow cathode lamp is a type of glow discharge tube that uses a hollow cathode to enhance the emission intensity. Compared to parallel plate electrodes, using a hollow cathode increases the current density by more than 10 times and this is accompanied by a significant increase in light intensity and a lower voltage drop in the lamp. This is known as the hollow cathode effect (or hollow effect).
When a voltage is applied across the electrodes of a hollow cathode lamp to cause a discharge in the lamp, electrons pass from the interior of the cathode to the cathode-fall region and flow through the negative glow region toward the anode. This causes ionization of the gas within the lamp through inelastic collisions with the gas atoms. Positive ions generated by the gas ionization are accelerated by the electric field and collide with the cathode surface. The kinetic energy of ion impact causes the cathode materials to sputter (or fly) away from the cathode surface in the form of an atomic vapor. This metallic vapor consists primarily of single atoms in the ground state and they are thermally dispersed within the hollow cathode.
Meanwhile an electron bunch or cluster is accelerated by the electric field toward the anode. The accelerated electrons collide with the groundstate metallic atoms being diffused and excite the metallic atoms. The excited metallic atoms return to the ground state again in an extremely short transition time of about 10-8 seconds. At this point, monochromatic light characteristic of those atoms is emitted at an energy corresponding to the energy difference between the excited state and the ground state.
This transition of electrons occurs not only in the target element for quantitative analysis but also in other elements of the cathode materials, causing a variety of energy transitions to occur. So, in a wide spectral range, many spectral lines of those elements and the filler gas can be observed. Transition metal elements such as Ni, Co and Fe in particular result in an extremely large number of spectral lines.

Analytical lines marked with an asterisk (*) indicate the maximum absorption wavelength of each element. Since each element has two or more spectral emission lines, select the spectral line that best suits the sample concentration.
NOTE:
①The guaranteed lifetime is defined by the product of the operating current and the accumulated operating time and is specified as 5000mA·hrs except for the guaranteed lifetimes of As, Ga and Hg which are specified as 3000 mA·hrs.

Note on the L233 and L733 series current values
The operating current and maximum current values listed above are specified as a peak current value. However, instruments using a pulse lighting system may indicate the lamp current value as the mean value. So, when using such an instrument, verify which current value (mean or peak) it indicates and use the specified current value to operate lamps correctly.
For atomic absorption spectroscopy (原子吸收光譜儀) using the S-H method background correction
Lineup of Giant-pulse Hollow Cathode Lamps 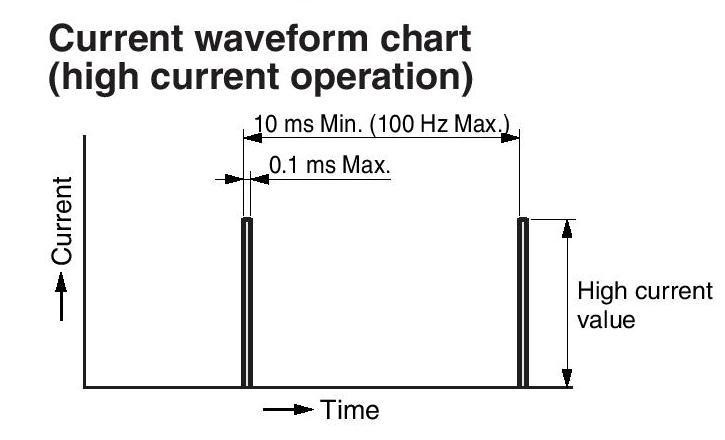 where c is the velocity of light, R is the gas constant, T is the absolute temperature of the gas, and Ma is the atomic weight.
Self-absorption occurs when there is a temperature gradient within the atomic vapor layer inside the cathode hollow, in other words, it occurs when the atomic vapor within the cathode hollow is flowing out of the hollow. In this state, atoms in the higher-temperature atomic vapor layer within the hollow are more excited than those in the lower temperature atomic vapor layer outside the hollow, and so cause light emission.
When the emitted light passes through the relatively low temperature atomic vapor layer outside the hollow, it is absorbed by the atoms in the ground state. This phenomenon is termed self-absorption and just as with the Doppler effect results in broadening of analytical line width and a loss of absorption sensitivity.
As stated above, deterioration in the analytical line profile depends on the lamp current, so care must be taken since increasing the lamp current may cause an excessive increase in atomic vapor. In actual measurement, it is essential to operate the lamp at an optimal current that takes into account both the analytical line output intensity and absorption sensitivity.
The self-absorption effect is large for high-vaporization-pressure elements such as Cd (Cadmium) and small for low-vaporization-pressure elements such as Mo (Molybdenum). The typical operating current for the former is usually specified as a low value. 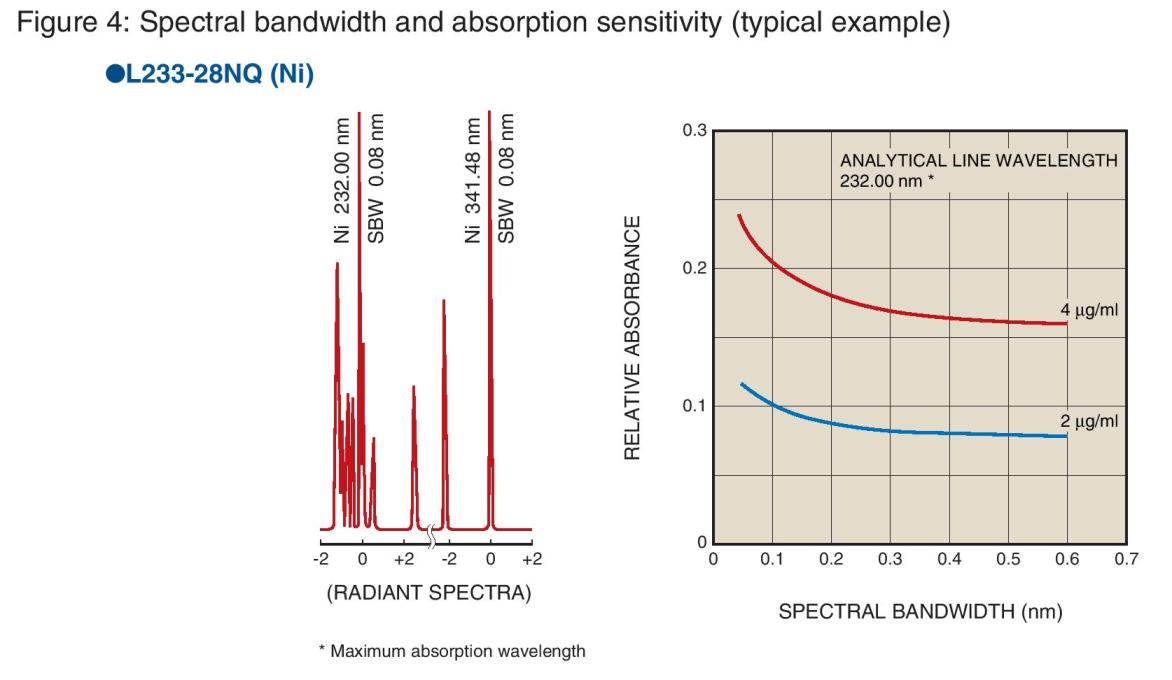 Time Stability of Analytical Line Radiant Intensity
As described in the section dealing with the emission process of spectral lines, sputtered metal atoms are thermally diffused during repeated inelastic collisions with electrons. In this process, during the period required for the metal atom density to reach equilibrium, the radiant intensity of the analytical lines varies. This variation usually occurs in the direction of increased intensity for 10 to 20 minutes after the lamp has started, although
it will vary depending on the element and operating current. After reaching equilibrium, the radiant output intensity at the analytical line wavelength is extremely stable.
In high-vapor-pressure element lamps, operation at excessive current levels causes excessively vaporized metal atoms to flow out of the hollow cathode space in the direction of the optical axis. This causes a temperature gradient to occur and might lower the analytical line output intensity due to phenomena such as self-absorption.
After a lamp has been left unused for a long period of time, some amount of time may be required for analytical line output intensity to reach initial stabilization, which results from changes in the cathode surface over time and depends on the element (especially alkaline element). Even in such cases, once the lamp is operated, it will light up normally from the next time.

Life
The life of a hollow cathode lamp (空心陰極燈管) is greatly affected by the operating current. This is due to the increase in the energy of positive ions colliding with the cathode surface which causes violent sputtering. During pulse operation as well, there is no change in the energy of the ions colliding with the cathode surface at each pulse, so lamp life is determined by the peak current and the pulse width (time width).
The following phenomena may be observed when a lamp has reached its life end:
(1) Discharge does not occur at the hollow cathode and the current does not vary even if the current control knob is changed. The analytical line output is not detectable.
(2) Extreme variations occur in analytical line intensity and the lamp current may also vary in some cases.
(3) The analytical line intensity weakens significantly and the signal-to-noise ratio deteriorates.
The major cause of these phenomena is a drop in gas pressure within the lamp. This drop in gas pressure is caused by the "gas clean-up" phenomenon in which cathode metal atoms sputtered during discharging attracts gases while being scattered and these adhere together to the bulb wall and electrodes at a lower temperature.
As the lamp is used, the cathode hollow shape is gradually worn away and deformed by sputtering from the discharge. These characteristics will vary depending upon the element and will exhibit small differences even for lamps of the same element.
Dimensional Outlines (Unit: mm)